In my previous post about my latest altered book, I mentioned that one of the pages – the fox page – reminded me of the Millefleur(s) art style. Millefleurs means “thousand flowers” in French and was a style using many flowers in the background of European tapestries between 1480 and 1520. The style was brought back into fashion by William Morris and his company Morris & Co.

I looked again at tapestries and particularly like Tapestry: Greenery designed by John Henry Dearle for Morris & Co. It hangs in the Museum of Fine Arts in Boston, US and features deer, rabbits and a fox beneath chestnut, oak and pear trees:

I love botanical detail in tapestries and paintings, especially with my recent rekindled interest in plants. i like the way individual flower species are depicted. I first really took note of millefleur in Botticelli’s Primavera in which there are about 190 species of flowering plants depicted and many have symbolic meanings:

I have decided to write/illustrate another little book that I’m titling The Tapestry Fox inspired by Tapestry Greenery and of course, the foxes that live around my way.

The fox as totem animal is coming back into my life. it is a good luck animal for me. I’ll follow it wherever it takes me. I’ve worked on a few ideas for the book:

In the first picture above I’ve added teasel, bramble, oak and hornbeam – I try and add plants that can be identified. i haven’t managed the sinewy trunks of hornbeam. I particularly like adding bramble (of the rose family there are over 300 species in the UK and deer love it so you can often tell if a deer has passed by the bitten ends of new bramble shoots. Bramble was used for fencing where barned wire is used now and then there are blackberries! A great plant!)

While on the fox trail, I’ve been experimenting with the idea of millefleur and foxes at the woodland edge in a larger, A3 picture. I’ve called it Millefeuilles Fox – Thousand Leaves Fox:

In the picture stars are sprinkled among the leaves and plants so the sky becomes the land and the land sky. I like to think it might be an allegory of some sort with a hidden meaning :)

i’ve created a couple of little booklets. I always feel good when I can combine drawing with writing, especially nature writing.

Fox is a flash fiction story about an urban fox. The writing won me a prize a few years ago and was first published in Creative Future‘s Impossible Things anthology :) The story is based on a fox encounter I had on the streets of Brighton. I’ve added three illustrations to this six page, hand-bound, A6 booklet.

The other little booklet is Hare. This is a piece of creative non-fiction that originally appeared in the summer anthology of the Seasons series published by Elliot and Thompson in 2016. It is about the hares on Havergate Island, off the coast of Suffolk, that I saw when I volunteered there. I’ve added a pen and ink illustration to this seven page booklet.

…As evening slides into night, I put on my coat and head out into the street. The night is sepia and a sleepy half-moon rests its belly upon the chimney pots of the houses opposite…
From Fox

You can buy them in my Etsy shop and my shop on this website.

I’ve written and illustrated three more pieces for my local Preston Pages magazine, Fox Hour for April, Sparrowhawk for May and Swifts for June.

As I write in the Swifts article, I’m doing a swift survey in my neighbourhood. It’s made me much more aware of all the activity happening in the skies above the city. Swifts are declining and the RSPB is monitoring them and encouraging people to put up swift boxes. To learn more, and see how you can help, go to the RSPB website.

You can read ‘Swifts’ here.

I still have a thing about foxes and have been watching them wandering around the gardens next door in the snow. I hope they find enough to eat.

Last year I took photos of the fox family sunbathing in the garden next door. One of the photos was taken in January, it must have been warm. 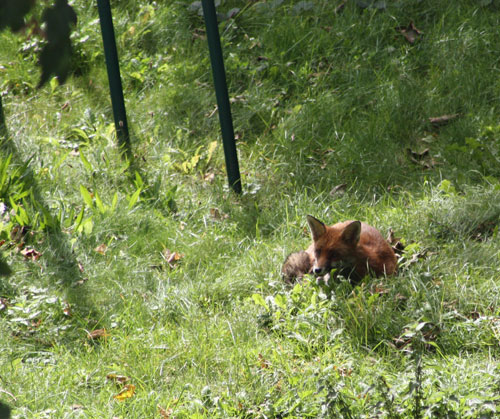 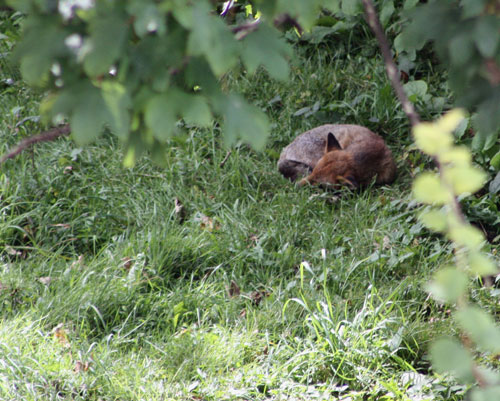 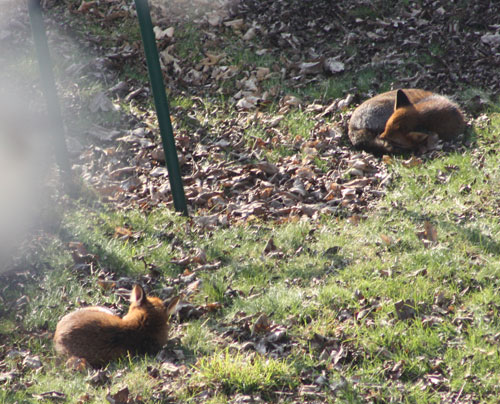 These are the inspiration for my fox ‘altered books’ except I draw them in a woodland clearing. I have yet to do an urban fox.

I’ve just created a pocket ‘altered’ notebook, Fox Wood, featuring a fox among some ivy covered trees and a couple of rabbits hidden in the pages. It’s now for sale in my Etsy shop 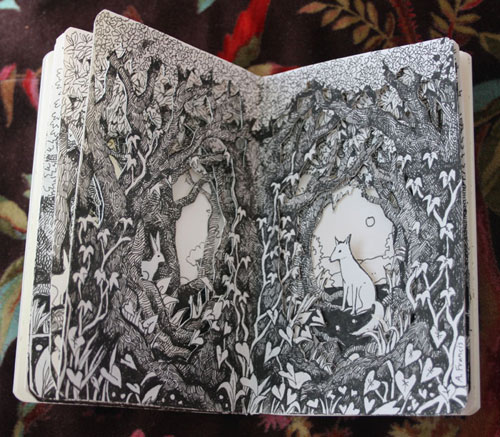 “It is the dark time of the year and there’s a fire aglow in the orchard; I hear fox.

As evening slides into night, I put on my coat and head out into the street. The night is sepia and a sleepy half-moon rests its belly upon the chimney pots of the houses opposite.”

So begins my piece, Fox, written for the Creative Future’s Literary Awards. I was so pleased, it won first prize for fiction, a Platinum award. At the Awards Ceremony and Showcase, in London a week or so ago, I received my award and read out my piece in front of an audience along with the eleven other finalists. Lemn Sissay introduced the evening and read along with Maggie Gee, both also contributed to an anthology of all the finalists’ work, titled Impossible Things.

Here is a video of me reading “Fox” at the Creative Futures Awards Ceremony. I’m a bit serious!