I am still working on the film poem I mentioned in my last post. I think it’ll take me a while.

Still, one thing that has come out of my Sea Trout project is the creation of new concertina cards. I call them concertina cards because they’re long cards folded twice. The idea arose from my long sea trout picture (click on the images for bigger versions):

I wanted to create a card out of the design and thought it would be good to feature a picture on the reverse side. So I drew a shoal of trout:

I decided to create a further two cards, both with a “trees” or “forest” theme. The first of these is In The Forest. One side of the card features a daytime forest scene with deer and a fox beneath the trees:

On the reverse is a night scene featuring badgers, deer, foxes, owls and hedgehogs:

It reminds me a bit of a tapestry :)

Here is the finished card:

My third card features a badger sett. One side you see a badger family out foraging at night:

The other side shows a cross-section of the badger sett with some slumbering badgers along with a rabbit burrow, tree roots and a burrowing mole:

Here is The Badger Sett card:

All cards are available from my Etsy shop and come with a little tag for a message and a square kraft envelope. :) 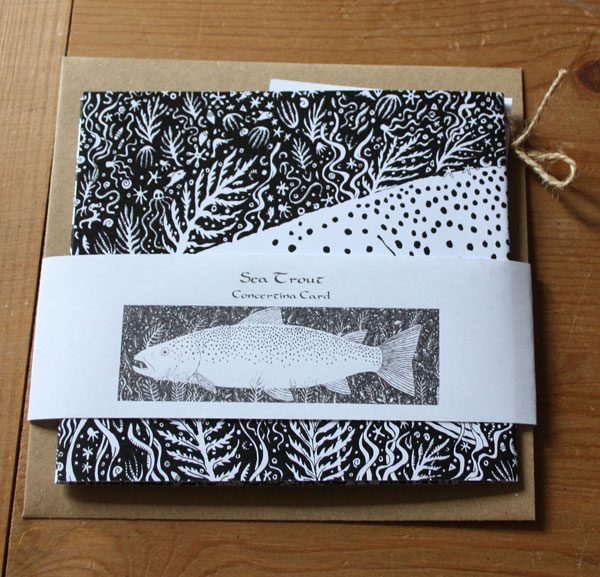 When you are lost, you look for landmarks to get your barings, a map perhaps and tools to navigate. This year I have felt lost and adrift, but paradoxically anchored like a buoy and going nowhere. I suffer from a sort of sea vertigo, clutching at nothings. Time has passed and I have little to show for it. When in a state of quasi-suspension, like a trout caught mid-stream, I need a project.

Recently I received the e-newsletter from Dark Mountain and read Charlotte Du Cann’s piece, Sea change, which resonated very much with me. I was especially moved by the little video included in the post, Manta Ray, from the film Racing Extinction. Why watching zooplankton is moving I cannot say, but I felt very humbled and loving towards all of life after watching the video. Here it is:

I mused about the sea and being lost. Soon a project started to develop. I wanted to work with paper, ink, maps, currents, islands. I had few clues as I was feeling ‘at sea’, amniotic and floating. So I returned to an old motif, the fish, and thought about sea trout and their amazing life cycle. Like salmon, they hatch in rivers, go out to the sea and return years later to breed. They undergo a transformation, a metamorphosis – they shapeshift between fresh and saltwater, their lives mysterious and subtle. I like that change and adaptability.

Sea trout spawn in some of the rivers here in Sussex. You can read a well written description of their life cycle on the Ouse and Adur Rivers Trust website. I have been doing river surveys for OART for the past few years, looking for ‘redds’, the piles of gravel the fish make for breeding.

Occasionally I see a trout and once I watched several jump up a weir. Sea trout are not lost, they recognise the ‘taste’ of the water where they hatched and return to the same river to breed themselves. Each river has its own olfactory signature. They may pick up other clues to find their way to their native waters, such as the magnetic field. Who knows. I think it is amazing. Follow your nose… find your way.

The river pulls me too.

I doodled in my sketchbook, sea trout…

and drew a foldout image of a sea trout.

The Dark Mountain piece was illustrated with photos of artwork by the artist Leya Tess. She draws marine designs on sea charts. I decided to take my inspiration from her as I have some old nautical charts, acquired from an auction some time ago and waiting for a project. I used a chart that shows the area of coast where the Sussex rivers – the Ouse, Adur and Cuckmere – enter the sea. Here is my finished artwork:

I also visited one of the gravelly streams where sea trout come to make their redds and spawn. I filmed under the shallow water:

I am going somewhere in a way. I have made a start and hopefully it will lead me futher. I’m now working on a brief film poem. 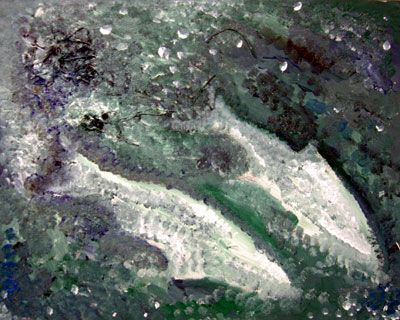 Thick lipped, migratory, prising off mussels on its benthic trawl….washed in with waves, harbour close…

I had a sudden surge of creativity yesterday evening. I’d been meaning to get down to doing this painting for a while and decided that I really wanted to paint in oils. When I searched my oil paint bag, I realised I was out of white paint. I just couldn’t wait to buy some so out came the acrylics and I slapped them on a canvas mixing the paint with a bit of builders’ scrim. It was most satisfying, but I know the result is a bit of a mess.

An afternoon wandering the undercliff. A glance over the side of the wall and below we glimpsed fish swimming hazily into view and then disappearing into the waves. I had to persevere to get some sort of photo but the result inspires me to paint the scene. Here is my photo, thick lipped mullet after mussels or seaweed on the sea wall: 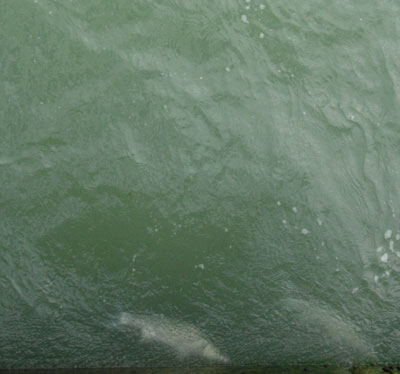