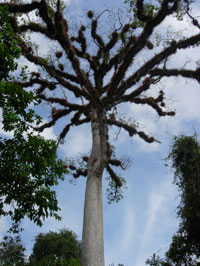 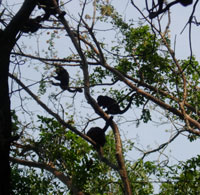 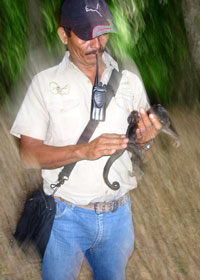 Sometimes I hate words, they fill up my head like beans in a jar, all crammed in, words upon words. But then, words can be like water, spilling, flowing, spreading across the page in a shifting stream.

I fell in love with water images a while ago. Photos of sea and sky, beach, pebble, seaweed, waterfalls; the glistening light on water mesmerised me. Perhaps I should try harder at photography with its lenses, glass, transparency. And voids. Words can fill voids.

And then I discovered cave pools in Laos. I stripped off and went into sparkling, pristine water with a baking, morning sun overhead and shadows that cut the shallows with cool. I’ve done this before, I thought, – sacred cenotes in the Yucatan, rainforest rivers in Costa Rica, serpents threading the water beside me, almost alone.

There’s something so precious about swimming in natural, wild places. Water joins up memories like one, giant underground river.

I stumbled on photos of a dancer in water while searching the web. This is of Salma Nathoo, an ecological dance artist taken by Ben Ellis for a ‘Waterdance’ project.

Water, nature and movement, my interests all coming together. Soon, I went out and bought myself an under water camera case. I haven’t used it yet, but watch this space. I have Roger Deakin’s ‘Waterlog’ from the library ready to read and the other day I stumbled on wildswimming.co.uk. It’s a challengue for a feeble swimmer like me.

To get back to words, there’s Alice Oswald’s poetry that I’m just discovering as well. Here’s a quote from ‘Sea Poem’;

What is water in the eyes of water
Loose inquistive fragile anxious
A wave, a winged formsplitting up into sharp glances

What is the sound of water
After the rain stops you can hear the sea
Washing rid of the world’s increasing complexity,
Making it perfect again out of perfect sand…. 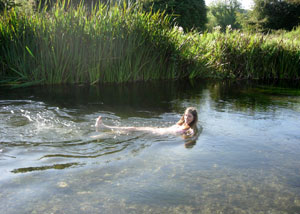 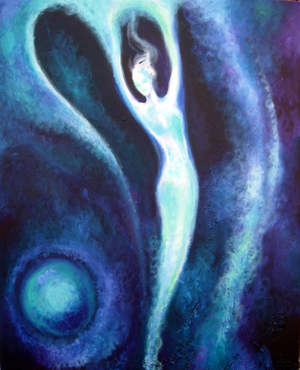 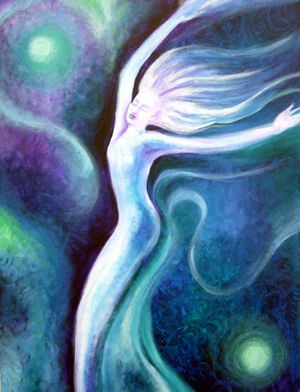 I’ve been very inspired by certain calendars I’ve seen at the end of last year. I did wonder whether my artwork – eg Spirits of Nature – was good enough for a calendar, so I’ve approached one or two publishers. I noticed calendars featuring the words and poems of Rumi during my browsing and I began to take note. Rumi was a 13th century Persian poet whose work has become very popular in recent years, especially in the US (probably mainly in new age circles). I’ve been searching and reading his poems and find them very appealing, very beautiful, profound.

Daylight, full of dancing particles
And the one great turning, our souls
Are dancing with you, without feet, they dance.
Can you see them when I whisper in your ear?

That’s a meer snippet, I’m a sucker for anything about dancing. Currently, I’m enjoying “Selected Poems” translated by Coleman Banks.

It seems as though I’m now noticing Rumi everywhere. Whilst googling ‘visionary art’ I discovered the Iranian artist, Rassouli, whose work I love (see www.rassouli.com). He publishes a Rumi calendar and I’m hoping to get one for next year. He’s been inspired by Rumi and another Persian poet, Hafez, who I’ve yet to read. I’ve found myself painting in a similar way recently, I don’t want to copy, but it’s good to be inspired.