Last December, before lockdown, Kevin and I went for a night walk up Wolstenbury Hill beneath a near full moon. The hill is one of my favourite local downland sites and I’ve mentioned it in a previous blog post. We have been on various night walks over the years, but this time I was inspired by the paintings of Samuel Palmer and wanted to see if I could get the same feeling beneath moonlight in a rural setting as I get from looking at his work. I also wanted to try to take a good photo.

My favourite work of his is Harvest Moon. I have a tatty postcard of it that I bought on a visit to the Tate Gallery years ago. You can read an interesting piece about Harvest Moon here:

Our walk began on the road to the north of the hill where we parked. There was no need for a torch except for the dimnest parts of the path where it was quite muddy. The moon was bright, almost full and beamed with it’s cool rays through the trees.

The wood was silent, no bird sound or rustle, but we could hear the A23 to the east and once we were clear of the wood and ascending the hill, we could see the bright glittering streams of cars and the jewel-like clusters of Hassocks and Burgess Hill. The sky was the colour of burnished silver. A dark bird flew low and silent over the hillside.

We paused to take photos, balancing the camera on a stile post. Then we proceeded up the hill, our shadows leading the way – moonlight shadows. (I am reminded of the song by Mike Oldfield that I used to listen to on my Walkman while sitting in the willow tree of my childhood home at night surrounded by the nightlife of the city streets.)

The woods looked so quiet, still, self absorbed and eery. It felt as though we were being watched. Perhaps we were. I didn’t feel the tranquil, nostalgic feeling evoked by Samuel Palmer’s Harvest Moon. Instead I felt the night and moon as impersonal, the feeling reinforced by the sound of the main road. How the traffic encroaches!

On our visit to see the David Nash exhibition last year, we popped into the gallery library where there was a small display of photographs by Allan Grainger, Downland Gloaming. I was curious about whether I could also capture the downland at twilight. Allan Graigner has been inspired by Eric Ravillious and Edward Thomas, who both cherished the South Downs. His work is informed by “…the way the land holds a palimpsest of memory in the twilight, revealing itself and feeding the imagination”.

Later I discovered the image below, Paradiso Canto by Gustave Dore, an illustration for Dante’s Divine Comedy. It features the ‘highest heaven’ which “… appears in the form of an enormous rose, the petals of which house the souls of the faithful. Around the center, angels fly like bees carrying the nectar of divine love.”

Inspired by this image, I’ve created a large pen and ink illustration of the moon surrounded by a chaotic ring of animals, Moon Animalia:

I started this illustration last year and put it aside to do other things. It is drawn on four separate sheets of A3 paper – I chose to do this as I can only scan A3 and then only in two separate parts. Looking closely you may see a few mangled animals where I haven’t joined the sheets very well! I’ll endeavour to work on this at some point :)

I thought I had more to say about night, especially as the nights are lengthening as we descend through the layers of autumn. However, it seems I have more to say about deer. Deer and night have become one in my mind, I am very close to deer right now.

Recently I’ve had a couple of deer encounters. One was when I was walking beside the River Adur with my partner. We spotted two roe deer in the distance – I could just see movement. Then they came in our direction bounding over the wet water meadows. It was a beautiful sight. The second encounter was in a wood not far from the River Ouse where we regularly walk. A hind roe deer was startled in the scrub and came rushing out. When she saw us she zig-zagged away and out of sight. We stood still so as not to panic her.

When I started my latest altered book, I was going to call it Night Queen and base it on my greetings card of the same name:

However, deer came to me and wanted to be included. So, now I’ve decided to call the book, The Night Queen and the Deer or Tonight I Dream of Deer.

This altered book is close to my heart, it feels more personal somehow – perhaps more full of magic and imagination! I’ve deliberately blackened in pages of sky and stars and have even – surreptiously – included the major stars of the twelve zodiac constellations on one of the pages,

and, on the deepest page on the right of the central spread, is a stag with enormous antlers, gently cradling the cresent moon. The Night Queen and the Deer is now on sale in my website shop and Etsy Shop.

I’ve been playing with deer imagery in other creations including two new greetings cards, Winter Deer and Deer Heart. Both are seasonal and I hope, just as magical.

They are available in my website shop and my Etsy and Folksy shops.

I do have more to say about night, it hides much, but I’ll leave that for now. 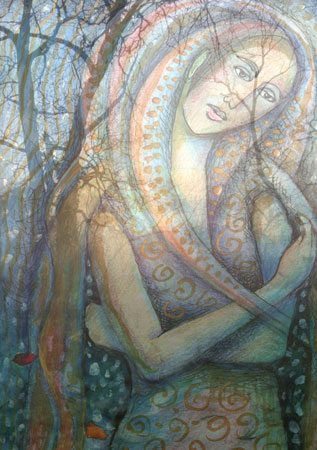 Back in November when seeking a good river site to release my Moana River Goddess, I visited the River Adur. Dusk was falling quickly and a mist was seeping up from the adjacent fields like some ghost of the land. In the fading light, I walked into the mist’s embrace and tried to capture photos of a sunset, dying pink behind the trees. It was very beautiful.

Now I’ve decided to overlay some of the photos with recent paintings and pictures. Here are the results, my Dusk Portraits. I like the underwater feel to the pictures and wanted them to look like old portrait paintings seeped in a twilight blue of age or paintings that have been x-rayed to reveal hidden images beneath. 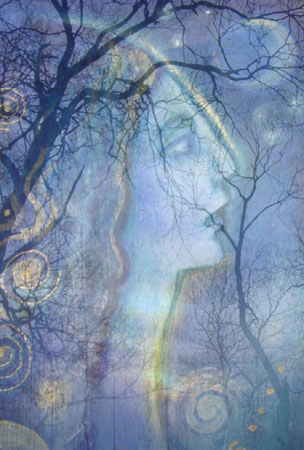 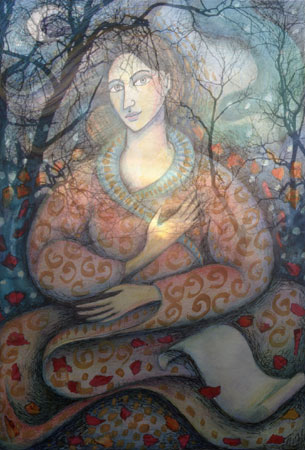 “When he shall die,
Take him and cut him out in little stars,
And he will make the face of heaven so fine
That all the world will be in love with night
And pay no worship to the garish sun.”
â€• William Shakespeare, Romeo and Juliet 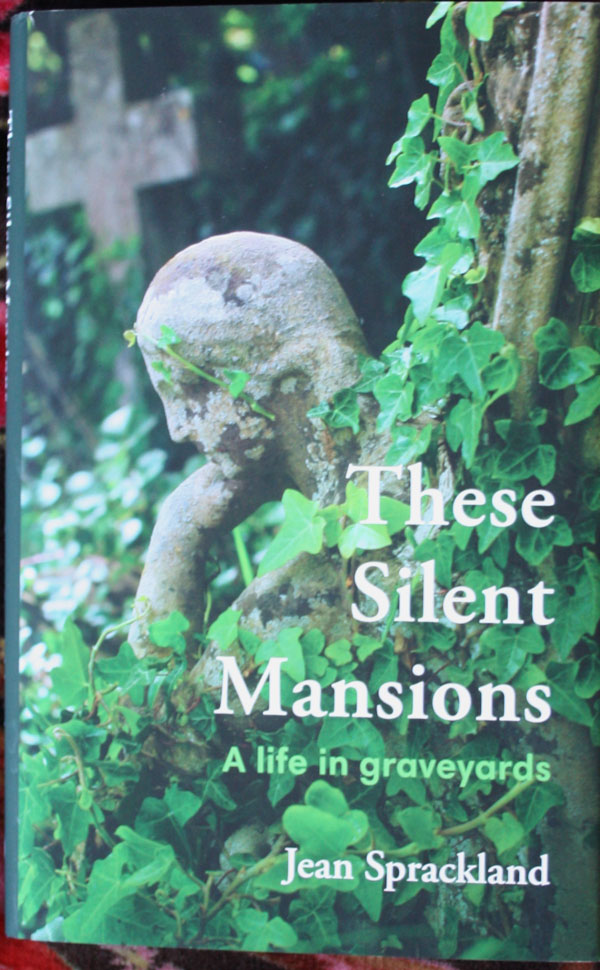