i’ve recently received a lovely long letter from a friend and it’s made me think of letters. I like anything to do with letters – apart from bills of course. I love writing and receiving them. I’ve kept many letters from the distant past including a brief handwritten one from Sir David Attenborough and an official one from Buckingham Palace! (This was a reply to a letter I wrote to the Queen when I was about twelve.) But letter writing has as good as died out – or so I thought. More on that later.

A year ago I was fascinated to hear about some 17th century letters discovered at Knole Park in Sevenoaks. You can read the story here on the National Trust website.

In the Netherlands a trunk of 17th century undelivered letters was rediscovered in 2015. Apparently the trunk belonged to a postmaster and postmistress who were central in the international communications of the time. None of the letters were ever delivered and were still sealed. In the 17th century the recipient paid the postage so if they were uninterested, dead or away the letters would remain unposted. The website about the project has some lovely photos that include the ones below.

There’s something sad and romantic about them – unrequited love, words lost in time, words never heard until now, coversations from times gone by. They are beautiful to look at too – pink, cream, handwritten with seals, sometimes with drawings and folded so carefully; someone went to a lot of trouble. They hide secrets and those secrets are now being revealed.

Sometimes when I write letters I like to insert leaves, feathers, pressed flowers, cuttings, photos or drawings in with them. I think – and hope – the recipients appreciate this. But my letter writing opportunities are very few these days. I remember when I travelled through Africa in my twenties, before email, mobiles and the like, I looked forward to the next poste restante where I could pick up my mail. It was all out of date but so special to receive it didn’t matter.

I have a few interesting wabi sabi letters that a friend, who buys old stuff from auctions, gave to me. They’re written in an Indian script, possibly Tamil or Kannada as there’s a Mysore letterhead. I’d love to know what they’re about.

I like the idea of doing a letter writing project that would involve leaving a letter or poem inside a library book or hidden in a crevice somewhere in Brighton for someone to find.

Leaving something behind, a trace, a message from what will one day be the past appeals to me, like messages carved on beech trees or chalk cliffs, like ghost signs on buildings…remnants…. 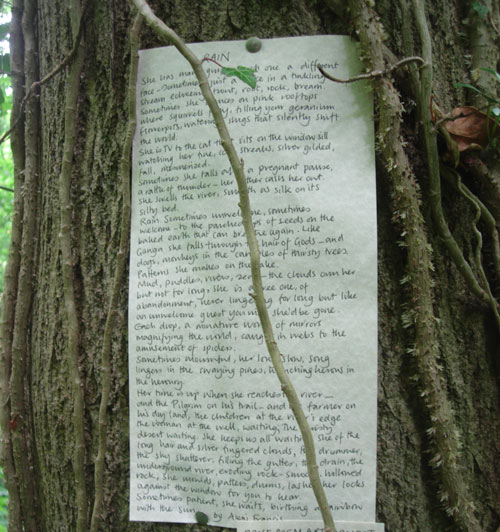 I would also like to leave one beneath the floorboards in my flat for any future occupants to find. A sort of treasure.

I was pleased to find a letter writing organsation, More Love Letters, which arranges for letter writers to send letters to people who would appreciate a kind note, a wish or a letter at a difficult time in their lives. When I get around to writing one I shall include a Memory Tree book and one of my cards. Which makes me think, if you know anyone having a difficult time who would appreciate a card – and perhaps one of my little books – from a stranger do get in touch. x