While in Nepal, I buried a little packet a friend gave me on top of Poon Hill under the gaze of the Dhauligiri Massif. Now my friend will be taking a voyage back across the Atlantic from Brazil, a true dream trip. When she goes, I’ll be giving her a gift to the ocean, a bottle with a picture inside that I hope will be washed up and found one day. She said she’ll drop it in the mid Atlantic so it might get caught by the Gulf Stream or find itself aswirl in the North Atlantic Gyre ending up in the Sargasso Sea. Perhaps it’ll stay in the North Atlantic Garbage patch instead! :(

There’s a sad story about a message in a bottle that was found a few years ago. Here‘s a link to the story.

My picture has drawings both sides. The swan image just came to me. I wanted to depict a bird that flies at night. I’ve linked it to the moon, so perhaps it symbolises a messenger like Mercury. The swan is a symbol of light in many cultures and is associated with the sun and the God Apollo in ancient Greece. The god Zeus took the shape of a swan to get close to Leda, with whom he had fallen in love. Sensitivity, intuition and grace are just some characteristics associated with swans. A swan may represent the Soul and travel to the “Otherworld”… and it was once believed that swans sing a beautiful song when they’re dying. They are wonderful birds!

I want the wild swan to be freed from the bottle like a genie, free the wild soul!

“When the swan of the soul takes flight at last, it needs neither signposts nor maps.” Vijay Bhattacharya. 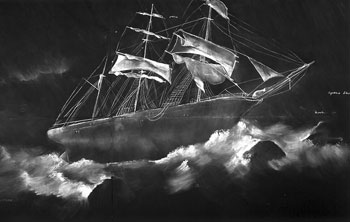 I have been musing on loss and ‘lost’ recently, (especially after reading Rebecca Solnit’s Field Guide to Getting Lost.) I’ve also been adrift on an unknown sea of ships, wrecks, dreams and memories. While drawing the little picture for the bottle, I thought of my mother and how I would draw little pictures for her. I guess my mother is connected to the sea and loss, dreams and all those fragmented memories that keep coming back to me. Perhaps that’s why I’m looking into the artwork of Tacita Dean; she too, has a fascination with the sea and of lost and found things. My life at the moment, it seems, is all flotsam and jetsam, a jumble of fragmented things and I’m caught within the liminal trappings of a dream. Wake up, I keep telling myself! But I so want to escape… steal away on a boat somewhere… 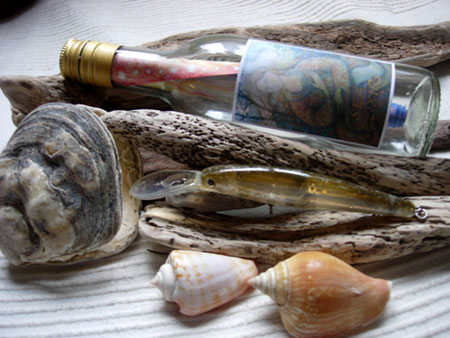 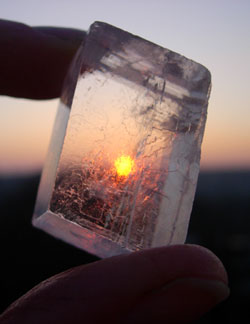 During an online search I learnt about the crystal Iceland Spar. In ancient Norse legend, the Vikings, who travelled across the Atlantic, are said to have navigated by using sunstones to find the sun on cloudy days. In the summer there would be constant daylight so navigation by the stars was restricted. A new study has looked at the Iceland spars as possible navigation aids after the discovery of one on a 16th century British shipwreck, the Alderney. If held up to the sun and rotated, the crystal is said to capture polarised sunlight. There’s only one point in the crystal where two sunbeams are equally strong, an angle that depends on the beam’s location. On sunny days the navigator would mark the sun’s position on the crystal and compare the position with the strongest point on cloudy days to locate the sun’s position. I really like the possibility of this and gave my friend a piece of Iceland Spar to take with her.

There’s been quite a lot about ships and shipwrecks in the news recently. I have a fascination with wrecks, ships and figureheads, but more on that another time. 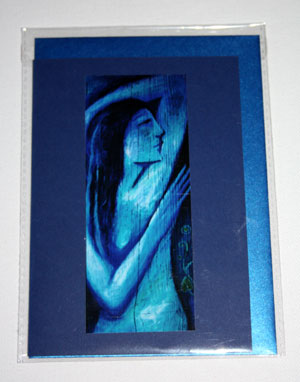 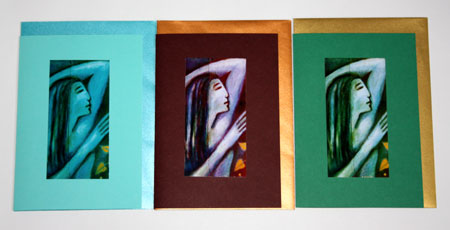 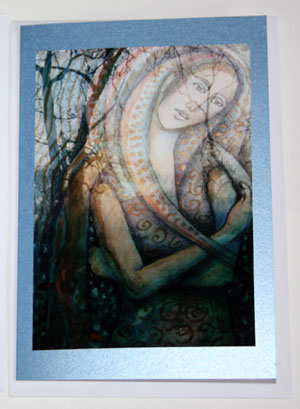 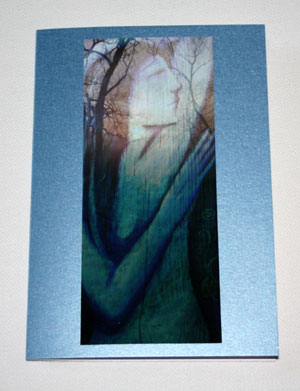 I’ve been making some handmade cards for local shops and for sale online. I’ve been meaning to try and design some to get printed but haven’t had the inspiration (I need to knuckle down and find it!) So for an experiment I had some photos of several of my goddess paintings and pictures done and made cards from them. I’ve played around with colours for variety. Soon I’ll set up a shop page.

Having thought a bit about blue, it was interesting to read a couple of chapters in Rebecca Solnit‘s book ‘A Field Guide to Getting Lost’. She writes about the colour and discusses various artists like Yves Klein who created blue art and even helped discover a deep blue pigment similar to the lapis lazuli used to paint the Madonna’s robes in medieval paintings. He called it ‘International Klein Blue’.

Here’s an excerpt from ‘A Field Guide to Getting Lost’:

I like misty blues at the moment rather than striking turquoise blues. My River Goddess ‘Moana’ stands in my living room but is perhaps a little too bright. As she lay on the riverbank of natural winter greens and browns, I thought how like a piece of vivid, fallen sky she was, a window into the earth. What would we do without blue?