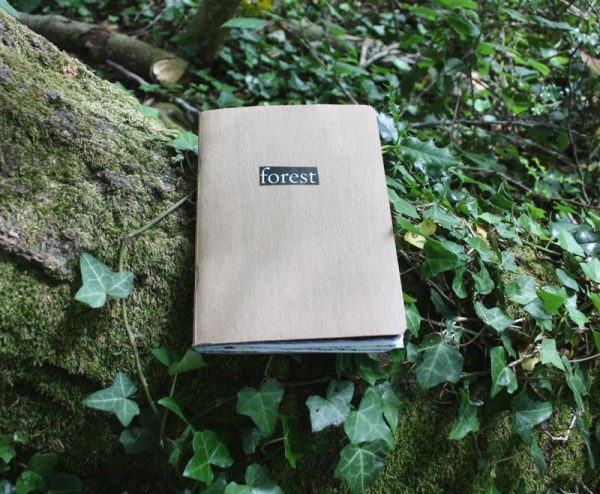 Last year a friend told me about The Sketchbook Project. This is a crowdfunded art library in Brooklyn of sketchbooks created by people from around the world. I love looking at other peoples’ sketchbooks, although I find making them myself quite a challenge. However, I was very interested in getting involved and decided to set myself the challenge.

To take part I had to pay a fee and was sent a small 5″ x 7″ sketchbook in a little string and washer envelope. I could do whatever I liked with the sketchbook as long as it didn’t end up being thicker than an inch or have loose bits that would fall off. I like forests – it’s possibly quite obvious if you’ve seen a lot of my art on this site, (at one time it was rivers, which I still feel very drawn to), so I decided to title my book, Forest and see what I could come up with.

I have pretty much finished the book now, so yesterday I ventured out to take some photos of it beside one of those giant beeches in Dead Beech Lane:

I like the poem ‘Lost’ by David Wagoner, so I wrote it out and incorporated a papercut overlay of pen and ink trees. I also wanted to include a fold-out page. I drew a forest scene based on the tropical forest I encountered at Seima Biodiversity Conservation Area in Cambodia some years ago, with myself as a tiny figure. On the back I’ve added quotes from a piece of my creative writing about looking for slow lorises in the forest (you can read the piece, Night Eyes, over in my writing pages here).

I did cheat a bit and stick in little drawings I’ve done in the past. Sometimes the white page can be a bit threatening :)

I’ve included my piece of writing, If You Are Lost You May Be Taken, that I wrote about in a previous blog post and finished the book with a mixed media collage of a ‘seed woman’ in the leaflitter.

I need to register my book and then send it to the US. I’ve been told to wait a bit for the library to reopen after lockdown.

On the inside cover of the sketchbook, I attached a small black and white image of myself communing with a pine tree in a Sussex wood. I’d hestitate to pose in the same way again :) (I was inspired a few years ago by Nikki Simpson’s Wild Women of the Woods project. I’m not exactly wild, but, sometimes, I like to think of myself as ‘of the woods’ – or, in this case, ‘of the Forest‘ :) 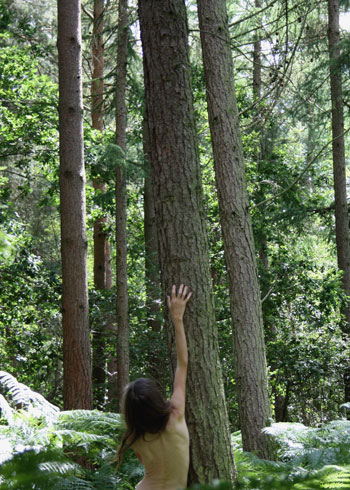 2 thoughts on “The Sketchbook Project – Forest”