Here is a story I wrote earlier this year, which I’d like to illustrate better:

There once lived a beautiful woman and her husband in a lush, tropical kingdom beyond the mountains. They had a baby girl called Echo, who loved playing in the garden with her mother.

Echo loved playing with the butterflies, the birds and the deer chasing them around the garden. Indeed she loved all wildlife and stayed outside long after the sun went down, sitting beneath the red fruit tree.

One day, Echo was playing in the wood at the bottom of the garden. The sky became very dark and clouds shifted over the sun. The beautiful woman called from the house for Echo to go indoors as a storm was brewing. Echo had not experienced a big storm before and gazed up into the sky. Large drops of rain began to fall. 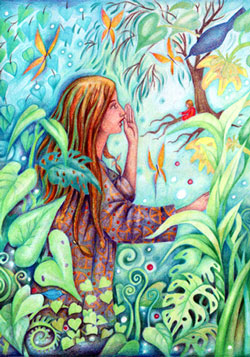 The beautiful woman came out and whisked her daughter inside the house.

The storm was no ordinary storm. The winds came with gigantic gusts and whorled about the house and garden. In little groups, the animals hurried away to find shelter. From the veranda Echo watched them and dearly wanted to follow them and enjoy the torrents of warm rain that descended from above. Soon, she couldn’t wait any longer and while her mother went to take the bread out of the oven, she was off, running across the garden and down to the river beside the red fruit tree.

The beautiful woman realised Echo was gone and rushed into the garden calling,

But, Echo was gone. The river had burst its banks and whipped the child up in its watery arms, carrying her off down the hillside and into the mists beyond.

The beautiful woman called her husband from the fields and together they hunted high and low. But there was no sign of Echo, only some tiny footprints beside the swollen river.

Days and nights passed and still no sign. The beautiful woman lost her beauty and became thin and tired and her husband just sat with his head in his hands. The land felt their grief and became parched and barren and the animals wandered off in search of more fertile pastures.

A heaviness and sadness hung over the land.

Echo found herself in a little pool far away clinging to a branch of the red fruit tree. A curious deer came to the water’s edge and plucked the child up and deposited her carefully on the bank. Exhausted, Echo lay there in a patch of sunshine and went to sleep. The birds sang to each other in the treetops above.

Days passed into weeks, weeks passed into months and months into years. Echo lived in the forest with the animals and grew strong and nibble running with the deer through the trees and climbing trees with the squirrels. The sun bronzed her and the rain bathed her. She was happy and could not remember anything about her home with her mother and father far away. But although she was happy, Echo began to feel that something was not quite as it should be, something was prompting her to seek beyond the edge of the forest.

One night as the moon climbed the sky, the Goddess of Night spread her cloak and descended to the parched lands of the once lush kingdom, where the grief stricken couple still mourned their daughter. She entered the barren garden where the grass refused to grow and soft as a cat, she lent against the red fruit tree and took out her harp. A few magical notes took to the air and floated up through the bedroom window of the couple, beckoning to the woman to go outside. 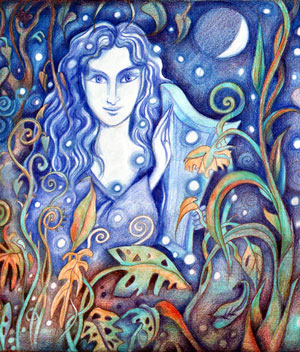 Thin and fraught, the woman came down into the garden and when she saw the goddess, she touched the raw earth and
fell to her knees. Both knew why the goddess was there.

“Please help me, Goddess”, the woman wept, “help me find my daughter and stop my grief.”

The goddess stroked one of the owls on her shoulder before answering.

“Here, take this seed from the red fruit tree and carry it to a distant land. There, on a cliff, you must plant it. When it has taken root and begun to grow, your grief will go and your life will return to normal.”

The woman was just about to ask if her daughter was alive and could be found, when the goddess wrapped up her cloak and faded back up into the sky just as the sun crept above the horizon.

The woman took the seed, shiny and new and put it in a special sack. She said farewell to her husband and set off down the mountain in search of a distant cliff top.

Now, Echo had a dream. In her dream she saw a tree with big red fruit and red leaves. It was growing on a cliff top and was alive with birds. As the birds ate, the juice from the fruit fell and nourished the earth. Some of it fell to the sea beneath where sea-maidens played in the surf. When she awoke, she knew that she had to find the tree somewhere and however long it took.

The sky rained down on her and the sun broke through the branches above. For a day and a night, Echo wandered to the edge of the forest. She passed fields of flowers, streams and over hills. And then, just as the sun was setting, overhead passed a flock of birds their beaks red with rich juice. Echo knew that she was close to a red fruit tree. The sound of the sea came to her ears and was that the laughter of sea-maidens she wondered?

Silhouetted against the sun, was a magnificent tree bright with red fruit, leaves and birds. And Echo remembered the tree in the garden of her childhood and held out her arms to embrace its trunk. More memories came flooding back as she held the tree tight; her mother, a beautiful woman with hair of silk and her father, quiet and caring. And Echo wept.

It was then that something caught her eye high up in the branches, something twinkling in the last rays of the sun. Echo climbed up with the birds and reached up, her hand grasped the object and then she could see that it was a ring encircling a branch. The ring looked familiar; it belonged to her mother. It was then that she knew that her mother had been there, that she must have planted the tree and in so doing, dropped her ring. The tree had gathered up the ring as it grew and held it as a beacon for Echo to one-day find.

Night came and Echo fell asleep in the tree’s arms.

It didn’t take Echo long to journey back home. She followed the river at first and then flocks of birds. Her mother and father were overjoyed to see her, now a young beautiful woman. They had given her up for dead many years ago. The woman, now old, once again became beautiful and her husband was so happy his garden and crops began to grow and thrive once again. The land signed and the animals returned as before. Echo was happy, she stood beneath the red fruit tree and remembered her time in the forest and that all was now as it should be.

They all lived happily ever after.

2 thoughts on “The Red Fruit Tree” 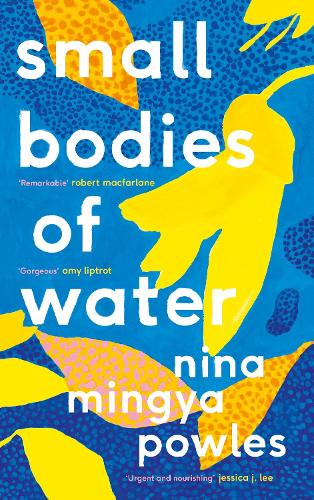