I’ve been wanting to photograph the elusive and fleeting wildlife encounters I’ve experienced recently around town — the sparrowhawk that flew straight across the road in front of me making a peeping noise and with a starling or blackbird in its talons. Or the fox which slunk past me on the pavement within a metre the other day, or the one glimpsed crossing the road and disappearing over a garden wall as we were returned from a walk on Hollyberry Hill Fort. My photo of him was too poor to show here, but I’m going to try and feature an urban wildlife photo each week from now on. That could be a challenge. 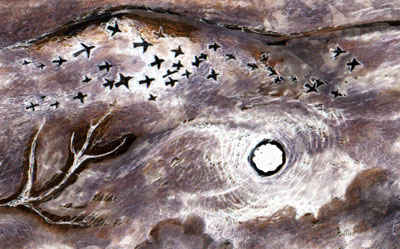 Last night I had a dream. I went into a room that was my room in the house I grew up in. The room was dimly lit but I could see that there were pictures, photos and shapes of birds all around the room. In the dream I was studying nocturnal bird migration. When I woke up I wrote it down and felt inspired to do a sketchy picture of migrating birds. I had distinctly seen swallows in my dream, but they’re more like starlings in my picture. The sky is overcast, not quite like the lovely sunny weather we’ve been having! Still, it’s been a bit dull today and I’ve been wrapped up with a cold — just like autumn! I need to do something colourful to welcome the better weather!

One thought on “Fleeting wildlife encounters”