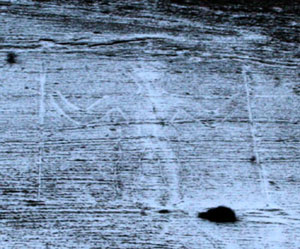 Cut into Windover Hill in the South Downs, is a giant figure known as The Long Man of Wilmington. He is one of two hill figures in Sussex, the other being a white horse. On a grey day soon after Christmas, I took a walk to the Long Man to take his photo in the snow, a “Ghost Man” on the hillside.

I wanted to visit the giant again as I had been asked by a friend to do a painting of him. I have illustrated him before for a chapter in a book on archaeology and folklore. The image I did then can be seen on my website here.

I’m intrigued by the stories and mysteries surrounding The Long Man. Some theories suggest that he represents Beowulf fighting Grendal, others say he may have been a god or hero, a pilgrim, a Roman standard bearer or some sort of fertility symbol. The Long Man is situated on a ley line and it has been suggested that he was a “Dodman”, someone who laid out the original ley lines with his two staves. 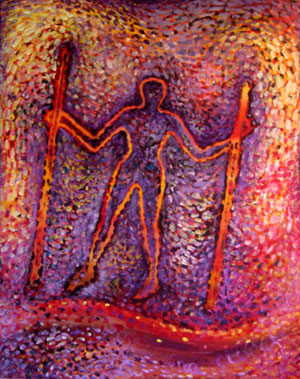 The staves may represent the “gates of dawn”, or a gate through which he is passing to either heaven or the underworld. Perhaps there once was a real giant and the hill figure is a memorial to him. Another story says that there was once another giant who lived nearby on Firle Beacon. A battle started between the two, rocks were thrown and the Long Man was killed. Perhaps the giant was a protector of the area, created to frighten people away from important flint mines and burial mounds. According to local folklore, King Arthur fought and won a battle at Flossenden on a nearby hill-top, where there are supposedly entrenchments and a cave.

I was interested to learn that Windover Hill is said to be one of many places on the South Downs haunted by “Black Dogs” which follow you around, the sound of their paws stopping and starting as you do. All these legends satisfy my desire for stories at this time of year.

I saw no black dogs or apparitions in the village of Wilmington. My only fear was negotiating the ice-rink car park!

My painting is now finished and is with its new owner. I called it “Long Man of the Coals” as it looks as though he’s emerging from fire. (It could also perhaps be called “Long woman” ??) Today I did a drawing in pen and ink that I’m calling “Long Man of Wilmington and Black Dogs”. It’s more fanciful than my previous Long Mans – I was inspired to do it when I stumbled on “May” by Eric Ravilious, which I think is such a great image. 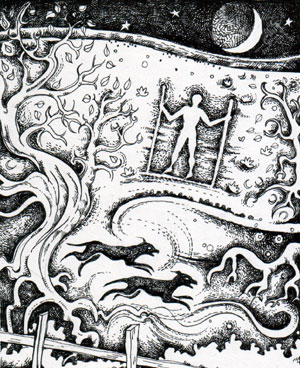 Dogs, wolves….it is also a full moon tonight, referred to by some as the Wolf Moon.

“..they come from the hills far away
Where the setting sun hangs low in the sky
Where eery caves echo and sigh
Where the sleeping bodies of soldiers lie.”

3 thoughts on “The Long Man of Wilmington”