Progress is slow on the art front. I’m continuing with my goddess book and every-so-often get drawn to doing a painting or two. While researching occasionally I stumble on an artist, poem or film that resonates with me. So I thought I’d share a few artists and other inspirations that make me feel encouraged to work more expansively.

Firstly I’ve chosen this video clip of Ariel from the film, The Tempest. It aludes to a liminal, spirit world just out of sight, beside the shore, through woodland trees on an island. A haunting, beautiful realm of magic and spirit. Ariel, male or female or both, resides there in this realm. I like the description of him that accompanies the video clip:

“the embodiment in spirit of human emotion, vulnerability and compassion. He can transform his physical presence into essences of light, fire, wind and water, and the corporeal manifestation of harpies, frogs, stinging bees and bubbling lava”.

Freed from his/her imprisonment in a tree by Prospero, he/she is bound to serve the magician but yearns for freedom; (I can relate to that.)

Full fathom five thy father lies;
Of his bones are coral made;
Those are pearls that were his eyes;
Nothing of him that does fade,
But doth suffer a sea-change
Into something rich and strange.
Sea-nymphs hourly ring his knell:
Ding-dong,
Hark! Now I hear them – Ding-dong, bell.

Ethereal, otherworldly, ghostlike, haunting, with nature and water – all ingredients that moved me to paint my Siren picture a few years ago. 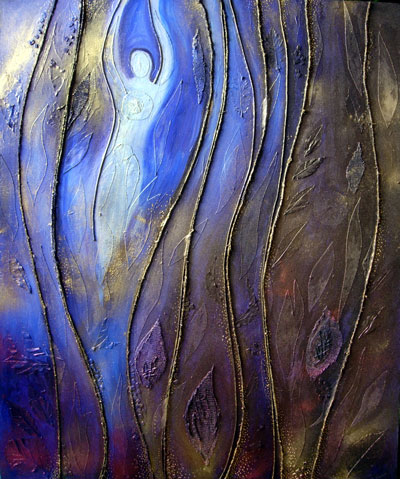 I’ve drawn on my Siren painting for my goddess Lethe of the River Hades, one of the six rivers of the Ancient Greek Underworld – a goddess of the liminal world. While researching for her, I stumbled on the an installation which was the result of a collaboration between the sculptor Rosalyn Driscoll and the film-maker Tereza Stehlikova called “Rivers of Hades: Forgetfulness (Lethe)”. 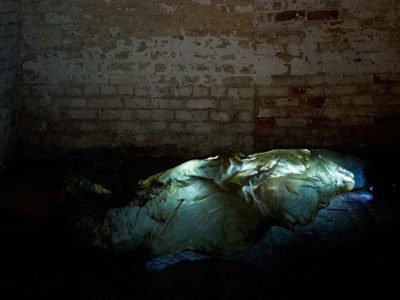 Both artists were exploring perception and synesthesia. (Synesthesia is something I’m fascinated by … hearing colours, seeing sounds, the blurring of the senses.)

I like the description and photos of the installation, how it is about a viseral relationship with nature, memories, feelings and dreams. It is made of translucent rawhide giving it an organic, animal quality and the colours of twilight. It is sculpted in such a way as to suggest water caught in time or a body in water with video images projected on or through it, representative of memories, dreams, the otherworldly, hauntings, ghosts and death. This is Lethe, a river which the dead must cross to forget their former lives, a River of Forgetfulness (like my River of Memory painting that I have painted before). Video images cross and blur boundaries and edges suggesting impermanance and fragility. I would have liked to have seen the exhibition and the Sensory Worlds conference that staged it.

One thought on “A Few Inspirations 1”