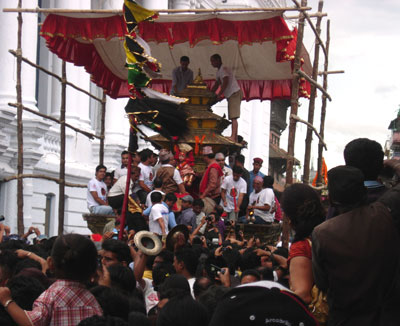 A day in Kathmandu. We stumbled upon Indrajatra, a festival to celebrate Indra, the Hindu god of Heaven and Rainfall. At this time a fearsome face of Shiva, the deity Bhairab, is displayed. It is also an occasion when the Kumari or “Living Goddess” comes out from her house and leads a procession around Durbar Square. Kumaris are pre-pubescent girls chosen and worshipped as “Living Goddesses”. The chosen girls need to have ‘thirty-two perfections’ of a goddess including a neck like a conch shell and a body like a banyan tree.

Caught up in the throng of people, we surged back and forth with our cameras trying to see the young girl as she was lifted into a palanquin. Crowds swamped the temples, reds, pinks, blues. Vegetable stalls still traded with neat rows of vegetables, people appeared at windows, waiting expectantly, watching the frenzied dancing of a man with a ceremonial pole in front of the ungainly palanquin. I craned my neck to survey the erotic carvings beneath the temple roofs and took photos: three women in red with a young boy and a Seto Bhairab mask. The predominant colour was red, everywhere, red against red brick temples.