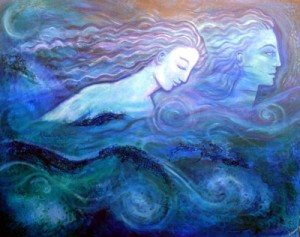 Here’s an update on the painting front – and back into the world of blue.

In Brighton, there’s a new Pop Up Gallery next door to Retail Therapy where I sell cards and various other creations. Back in August I was invited to display some of my large paintings on reclaimed scaffolding board. I welcomed the invite and painted two new boards in acrylic, Goddess of the Vine and The Forest Rises.

I also gave a large, acrylic canvas called Water Maidens (Emerging in the gallery) which has undergone various incarnations and now features two “Water Spirits” inspired by the Russian legends of Rusalka. ( These are fish women who were said to live at the bottom of rivers and lakes and bring fertility to the land in Springtime. Some thought them to be the souls of young women who had died beside the waters. I’d like to explore these legends further…) Looking at the painting obliquely one can see the relief created by the scrim and oak leaves I added for texture.

To my surprise and pleasure, the first two paintings sold quite quickly and journeyed up to Derbyshire apparently. The gap they left needed to be filled, so I gave two more painted boards, my Moanna, River Goddess – she’s well acqainted with the River Cuckmere – and one called Mother Nature both of which had been happily guarding my living-room. (See the photo with both either side of a lamp in the gallery.)

Ten days later and Mother Nature acquired a new home. So back to painting I went and created another two goddess board paintings that are currently on sale in the gallery, Wings of a Dove and Butterfly Maiden.

The imagery for the paintings just comes to me. I’m not looking for anything typically symbolic, I guess I just like doves, vines, waves, macaws and butterflies – morpho butterflies of the tropical Americas especially! I am influenced by shamanic art and traditional religious art too and I think of the paintings as sort of totem poles or stelae, without the grave association :) 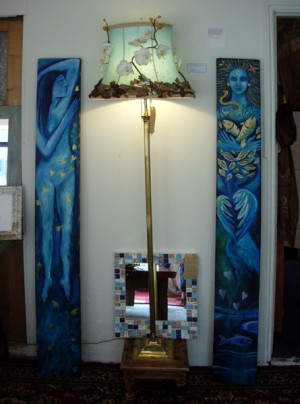 One thought on “New Paintings and a Pop Up Shop”