This article was first published in summer 2018 in Toast online magazine. 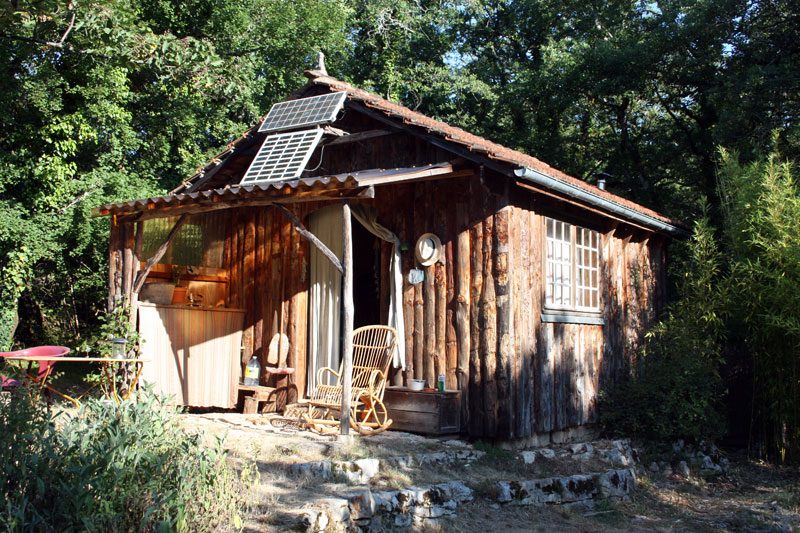 On a hillside in the old region of Quercy in southern France surrounded by oaks and maples stands our little cabin. It is handmade from rough hewn logs. There are two small solar panels for lighting and water comes from a tank and needs to be filtered for drinking. It’s rustic and simple and here it buzzes with sound; the forest is singing.

I have come here with my partner to spend a few weeks immersed in the natural world. From the top of the hill behind our cabin scrub and woodland stretch for mile upon mile with hardly a building in sight. We sit on a plateau between two rivers that snake through an undulating limestone landscape, carving steep-sided, honey-coloured cliffs and leaving broad meanders. If we walk south for a mile or two we’ll descend into the valley of the Lot. Walking north takes us to the Cele, one of its tributaries. 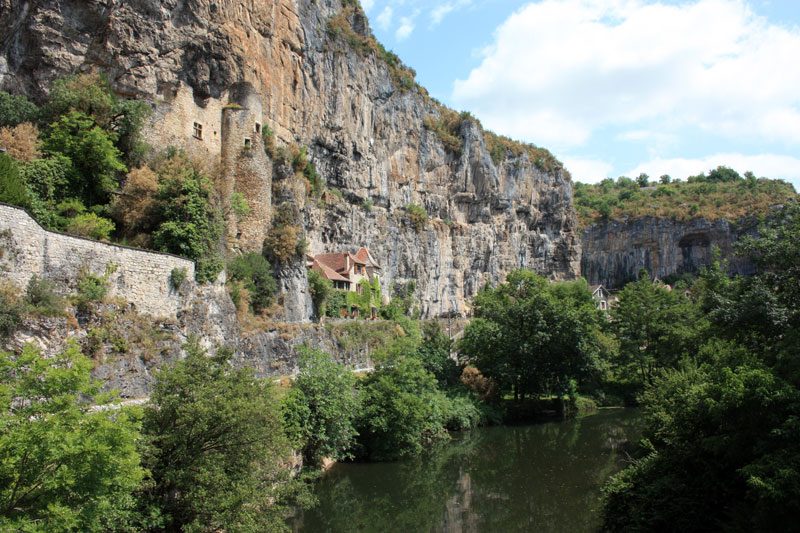 It’s mid-July, dry and hot, and the cicadas sing all day. At times it is deafening. To me the song sounds like a thousand maracas or, when they are just starting up, the winding rasp of an old-fashioned watch. By focussing on an individual song and searching carefully it is sometimes possible to spot one on a lichen and moss festooned branch, masquerading as the branch itself. Their pervasive, metronomic song is created by the contraction of a membrane in their stomachs that loses its elasticity below 22°C. This is when the insects fall silent, as they do in the evening and when it rains. We have caught them at their summer peek. They spend most of their four-year life-cycle below ground, only coming to the surface for a few weeks to attract a mate with their song and reproduce. The landscape holds many secrets.

At first I was overwhelmed by a sort of synaesthsia; the sounds, textures and colours; the buzzing, humming, chirping and flashing of the myriad insects and other life swept me up and enveloped me. 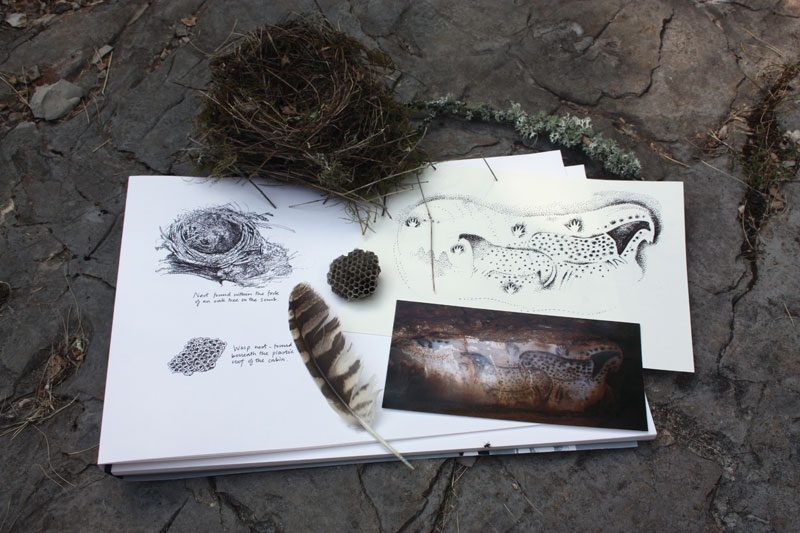 When evening comes its progress is marked by the emergence of various animals. First come dragonflies patrolling the glade on their late shift. Then, at about nine-thirty in the evening, stag beetles emerge. The males look comical as they fly upright, horns held aloft, wing cases spread, veering randomly though the air in search of a female. As night encroaches the bats take flight, then we hear nightjars and finally tawny owls.

“Here I have time to think, time to watch spiders build webs as I lie in my hammock”

Here I have time to think, time to watch spiders build webs as I lie in my hammock, time, simply, to be. I wander through the rough sun-bleached grasses and contemplate the changes the landscape has seen. There are layers of history, prehistory and deep time here. 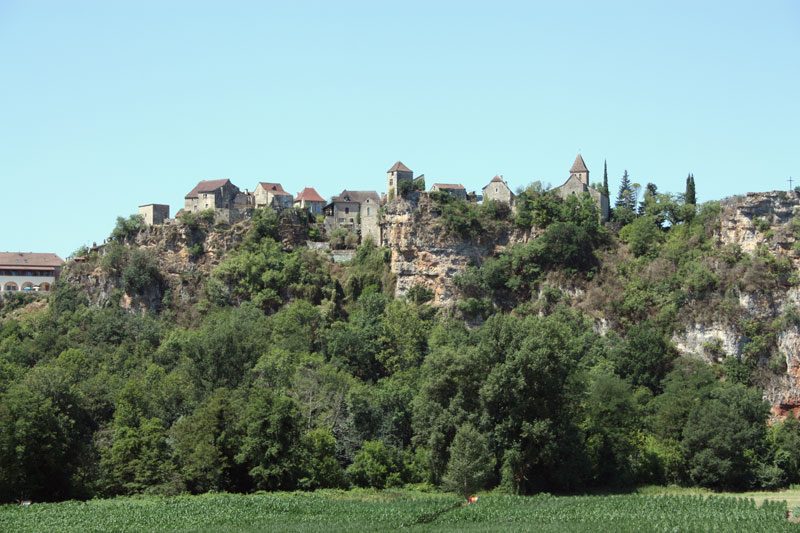 Farming in these hills brings to mind an earlier time. Farmers work golden fields on tractors that were at their peek decades ago. The fields at home in England must once have been brimming with life as they are here, before agriculture became intensive, fields enlarged and pesticides widely used. In this part of France the fields are small and so are the villages. Some are perched on the cliffs overlooking the Lot, like the village of St. Cirq de Lapopie, once voted the most beautiful in France. It is a picturesque jumble of turrets, towers, pigeonaires and steep, winding lanes where cars cannot pass.

A deeper layer of prehistoric time lies hidden in caves beneath these limestone hills. It is a world of Palaeolithic art, images of wildlife captured by the hand of our ancestors long ago, painted on the smooth walls of caverns and passageways sculpted by underground rivers long since gone. 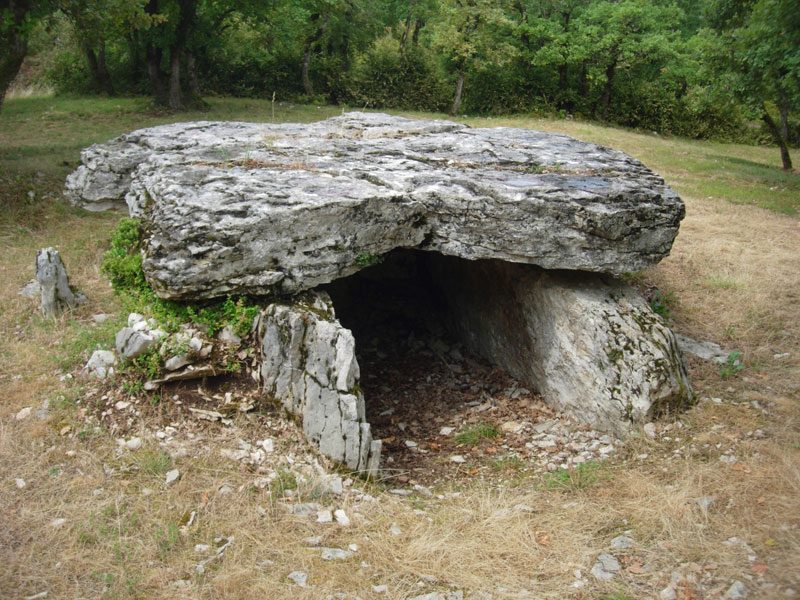 We take a journey to Pech Merle, near the village of Cabrerets, the site of some of the most spectacular Palaeolithic art in the area. We have booked on to an English speaking tour which starts with a 15 minute presentation about the caves. Then we are taken down into a cavern of stalactites and stalagmites.

It is spacious and awe-inspiring. Descending from the cavern roof into the floor is a long strand of roots massed together like hair; the roots of a single oak tree, solitary in its quest for water. It is like the world tree of creation myths, branches in the heavens and roots in the underworld; we have entered an ‘other’ world.

Down here it is cool, almost cold. Apart from the rustle of clothing, the muffled slap of shoe on damp floor and the muted voices of our group, all would be a silent black stillness, a velvet darkness punctuated only by the plip of water droplets off the stalactites.We follow our guide deeper, through tunnels full of geological formations mushrooming from ceiling and floor. What must the people of 14,000 to 25,000 years ago have made of these strange, alien shapes, glimmering and alive in the light of their simple lamps? In some of the calcite accretions I see seated Buddhas, faceless, wordless figures, family groups, silently waiting, contemplating, and suspended in time. For millennia. This could be a place of deities, rock gods, a realm sacred to our ancestors long ago. It would have taken a curiosity of mind and a strong spirit for those early people to venture here.They would have been brave and experimental, secreting themselves away to leave their mark, to create. Perhaps they were young, adolescents like the two boys who accidentally rediscovered the cave in the early twentieth century, while out walking their dog. 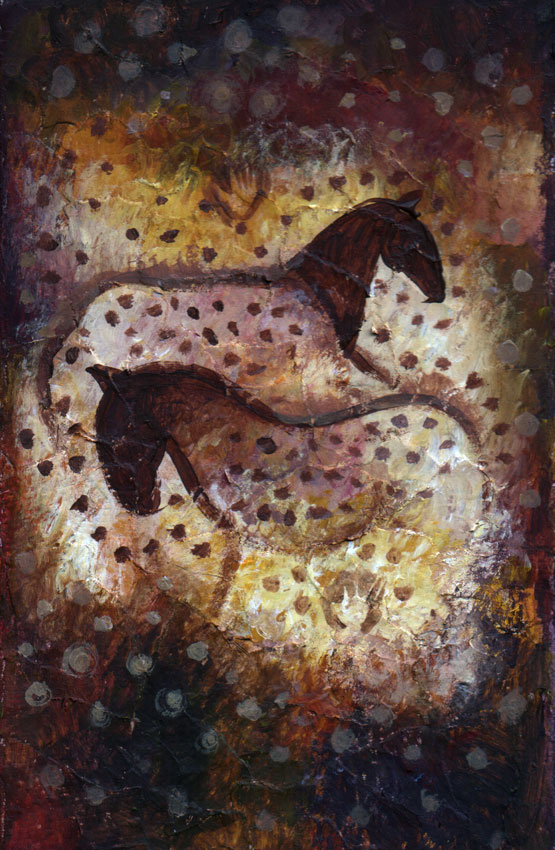 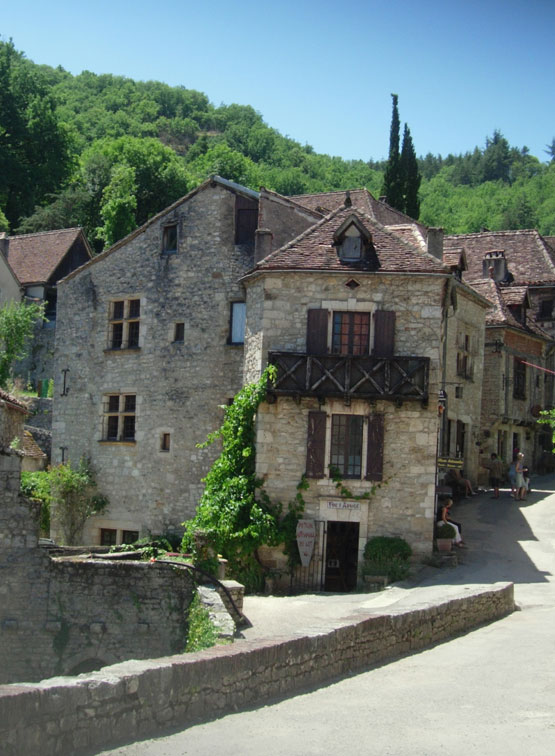 We move on to another chamber with a horse, mammoths, bison and aurochs outlined in black, manganese oxide on the walls. There is energy and movement in the sweep of the lines that bring the animals alive. A simple dark stroke becomes the unmistakable outline of a mammoth, another becomes the curve of its tusk. Animals overlay animals as though in a dreamlike, silent herd.

Another cavern, massive boulders. The ceiling has scratches in the soft clay, a sketched tangle of entwined bison and mammoths, a mammoth morphing into a woman with pendulous breasts, a ‘mammoth-woman’. It is easy to see how rock becomes animal and animal, human here; a realm of dream beings. Dots and sinuous lines – helped by the contours of the rock itself, glacial, river-worn and pock marked over time – become broad-bellied horses, a massive aurochs, the head of a stag. The animals stand or run, leap, collide and almost bellow silent roars from beyond the walls and across the millennia.

We come to the image of a cave bear scratched cleanly on the rock as though created yesterday. Through more dark tunnels and cool shadows we arrive in a long chamber with a smooth wall on which is painted a frieze of spotted horses. Their black heads are tiny, but where one of the horses is drawn the rock is shaped just like the head and neck of a horse making the creature life-like and almost life-size. These horses, we are told, were painted 24,600 years ago.

Dots and dashes, associated with some of the paintings, are perhaps symbolic of a shamanic consciousness, of a distant magical realm. Negative hand prints, created by blowing pigment on to the rock surface, were made by both a woman and a man. And there is a footprint crystallised in calcite, frozen in time from millennia ago, left when a young man walked across the cave through a wet patch of clay.

Emerging into the light the blanket warmth of the day hits us. Near the entrance we find the tree whose roots descend through to the cavern below. From its branches we hear cicadas singing.

Back at the cabin we cook a meal and sit out into the evening. The stag beetles emerge on cue, followed by the bats and the cicadas’ song is replaced by the soft chirp of crickets. Soon after ten, from the scrub, comes a churring sound like the rhythmic purr of an engine. A nightjar. We make our way up the hill where a few tall oaks stand silhouetted against the western sky. Sunset has been and gone; now it is dusk. A solitary male nightjar sits in one of the trees like a night watchman, a sentry. He sings his soliloquy as if just for us. Then he flies scimitar-winged, low over our heads and disappears into the night.