This piece of creative writing featured on RTE radio 1 Extra, an Irish radio station on 17th May 2020. You can hear it below on Soundcloud: 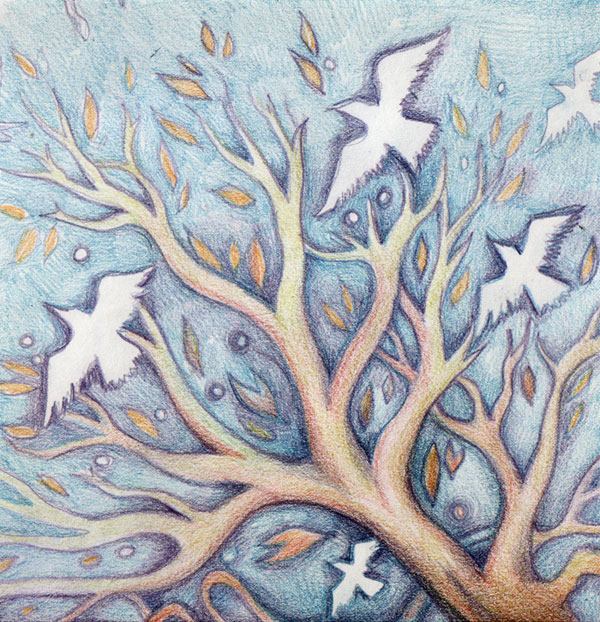 “Come,” she said and took my arm, her presence, a bristling beneath the skin. I had come a long way, stumbling among brambles, honeysuckle, white dead nettles. I had found myself here in her shade.

The light was fading, dancing leaf shadows on the trunks of the trees. The sun still oozed through the cracks and seams of the forest.

“Lie down”, she told me. The breeze was getting up, cold from the northern hills. I sighed and reached out my hands into the leaflitter. In the centipede, ant, woodlouse world beneath the fallen beech, I lay down, the trees floating about me.

A forest of archers came with dusk. They stood about me, dark silhouettes against the burgundy sky, ready to take me back. I wanted to forget, but my tangled dream enticed me down into oak and beech, hawthorn and hornbeam, spindle and hazel. And there it was, a hazel hand outstretched for me in the black earth, guiding me through the night.

She left as morning broke the yellow eggshell sky – and I sat alone beneath the fallen beech. The archers’ hoof prints in the damp earth led out of the forest. I followed. “There is no way if you are lost”, I heard the trees say blithely in the breeze. It will soon be over.

And soon I stood in the sunlight in the middle of the field. I took the graft of hazel wand and held it to my heart. Leaves began to sprout and unfurl from my branches that now snagged the skudding clouds overhead. Tendrils twisted from my nose and mouth. “It is too late”, she’d said, “too late.” The archers would not return now.

Down into the earth my root toes lengthened, clutching at chalk nodules, clutching at flints one by one. Snails took shelter among them, violets sprung up in the soil between them. Then, in my branches, a blackbird began to build her heavenly nest, twig by twig while swallows wove the cerulean sky above my crown.