This was originally published by TOAST magazine in December 2018. 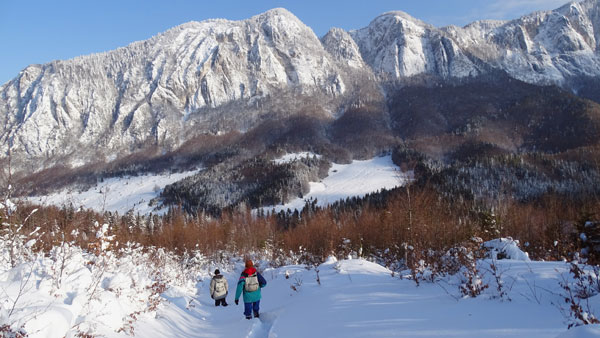 We parked the car and started walking along the track in silence, save for the crunch of our boots on the granite-hard snow. When we came to a stop, Ramon explained what to do if we came across a bear. We should not fear unless it is crouched and ready to charge. A bear on its hind legs is just assessing the scene, deciding what to do. There is time. Back away slowly. He spoke softly, in a quiet manner, having spent many years studying bears alone. There was much of the forest in the man.

The park reserve was thick with snow. Yesterday a blizzard started when we set off in the four-wheel drive. Over the Piatra Craiului Park Reserve, sky and landscape blended seamlessly, like charcoal smudged white paper. I could not tell if dawn had broken. These were unusual April conditions; the week before in Romania the temperatures had reached 24° C, now the thermometer read -4° C and in the early hours with the chill of the wind, that felt more like -7° C. We were stopped by too much snow – despite our winter tyres – and by broken branches over the track.

Today, the scene was similar, but it was no longer snowing. It was still and quiet except for a few birds beginning to sing into the pre-dawn air. The landscape was blue tinged, forest and rock shapes still full of night. The sun had not yet crested the eastern ridge but the day was opening as though a lid was being drawn back, letting in light. 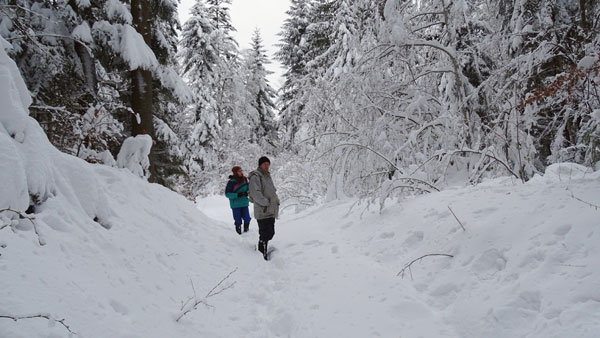 Ramon took us off the path into the trees through snow two foot deep in places. I stepped into the footprints ahead of me to make the going easier. It was tiring and hot work in my many layers of clothing – two coats, gloves and hat with gaiters over my boots.

Step by step through the snow. Sometimes a footprint revealed the stream, a mere dark trickle. The glassy clink of ice, the hollow suck of trapped water, a faint gurgle – give-away signs. We managed to cross without wetting our feet and, holding onto saplings, we continued further into the forest and started to ascend the valley side.

We climbed through Norway spruce, beech and fir trees laden with snow, pausing occasionally to catch our breath. A natural clearing opened up and the slope became steeper, the snow deeper. Ramon pointed out a track made by a bear, which had slid along on its belly. He showed us the two curved cleaves of a red deer track; a male red deer in walking gait. He could tell by the size and depth in the snow, the length of the stride, the alternate hind and fore prints.

It was still dim when we reached a flat view point from where we could look out over the valley and see the mountain ridge opposite, the tree line and meadows beneath. At first, a snowy landscape can appear like a simple scene especially in early light. A neutral scene. White, dark, grey. Then features start to appear: the snow-flurried tree trunks, logs and bushes, ermine meadows, the edges of the forest, cross-hatched.

We stood and surveyed the scene with binoculars and the naked eye. Eyes can play tricks in the half light. Logs take on new forms, become animals. I was convinced the incessant dancing and swaying of a branch in a draught of wind far off on the opposite side of the valley was a bear scratching itself. But it wasn’t. Dark dots in the snowfield became deer. And then I was seeing deer everywhere – deer bushes, deer shaped fallen trees, deer snow mounds. Dark, stick deer. The longer we looked the more the wood subtly seemed to shift into life. Obscure forms morphed from the forest edge, lynx-shaped, lichen textured, bear loping figments of my unreliable vision, my sleep deprived imagination. And we waited in hope, rubbing our hands, withdrawing fingers into gloves to keep them warm. Breath, smoke in the cold air.

The croak of two ravens sounded over the valley; there may have been a kill or carcass nearby.

Then I did see an animal, a real one at the edge of the wood, black on white, a dark, slender shape of grace. It was moving, pricking its way, ankle deep. A roe deer. Then there were three of them with sleek, long heads and large ears. Alert. On guard – or one of them was, the other two grazed.

The dark deer could easily have become a dark burrow, a hole in the snow, a silhouette, an absence. But they were real and good to see. Now I wanted to see a bear.

Ramon turned and gestured towards the hillside behind us. He wanted us to continue walking and following fresh bear tracks he’d found. He was convinced there was a bear close by. We trudged further on in the snow until we reached a tree covered rocky outcrop, a scoop out of the hillside. Ramon told us to stay back while he went on following the fresh line of tracks. He looked into the trees and backed away. Then he came back and told us that a bear was taking refuge in the trees, effectively cornered, and we needed to keep our distance.

Ramon clapped and the clap echoed around the chamber of rocks and bushes. The bear was in there waiting, listening, knowing we were there. Or was it? Had Ramon really seen a bear? The evidence was all around in the snow. I had to accept that it was there, although I struggled to believe.

Ramon hollered. His echo hung for a moment, but sound was muffled by snow on rock, snow on bush, on mountainside. Quiet, Stillness. Coldness. Waiting. In the after silence, hung a hollow absence, a could-have-been, might-have-been presence. He clapped again but the same: the after-silence in the encroaching dawn. 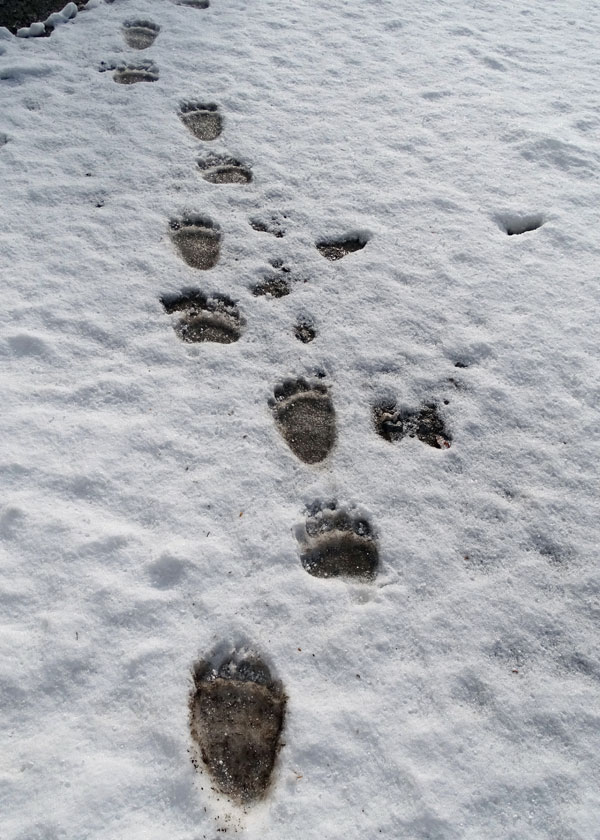 I looked down. The blue snow now sparkled like diamonds, crisp and clear – the air too was so clear. The mountainside had patches of rufus, purple and beige amongst the snow. Now the opposite slopes were sun-washed in pink light, fresh, vivid and new. It did not seem to matter that the bears weren’t to be seen.

We started going down. There were tracks everywhere, fresh tracks of bear, boar and deer. The bear tracks led into the trees across our own, bold, broad tracks, larger than my hand. Adult tracks and cub tracks. Ramon counted bears by the varying tracks – nine, ten bears had passed by recently, unobserved but leaving their mark so clearly in the snow. We were probably surrounded by bears.

Perhaps it is the wind carrying our scent, our voices or rustling clothing, the cold or heat which causes wildlife to retreat and hide. Sometimes elusive wildlife stays elusive.

The sky was now a clear, empty blue. The air was still and cold but the icicles on the branches dripped, the forest clicked and cracked as the ice and snow began to thaw. A chaffinch started singing and a chiffchaff chaffed and chiffed from a birch within the forest. The morning was under way and the valley and mountains shone in the magnificent light.