A Volery of Wagtails was first published on the City Creatures Blog in March 2018. 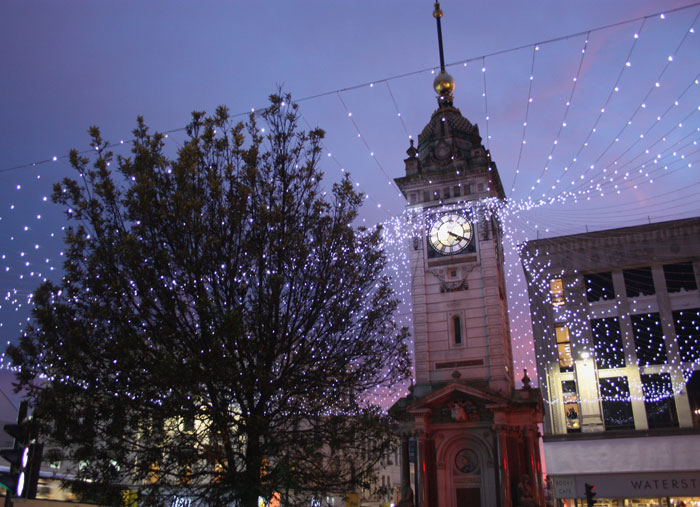 In the center of Brighton, beside the iconic nineteenth-century clock tower, stands a small solitary tree. It is an olive tree, an evergreen that retains small leathery leaves into the winter. The tree stands at a junction, especially busy during rush hour on a Friday evening in early January when the streets are lit up and lively with people returning home. Walking past, I pause and look up.

Above the traffic, telephone lines and Christmas lights crisscross the buildings and shops, and high above them in a darkening sky hangs a gibbous moon.

On the roof of Boots, our local health and beauty store, and on the ledges of the camera shop across the street, there’s a restlessness; it is as though the very buildings have become animated in sympathy with the street below. Dark dots of birds punctuate the outline of the buildings like notes on a stave. Above the human turmoil, an avian agitation starts up: the flutterings and hoverings of birds gathering at their winter roost.

The illuminated clock on the tower marks 4:20 pm and I notice birds begin to descend to the olive tree. First just a few flutter between the rooftops and the tree. Then more and more birds come down. They dance about the tree like restless thoughts, chattering excitedly. Among snagged plastic bags in the branches, the birds congregate, a fluster of wings and tails. They are pied wagtails—small, sleek, black and white birds with a long tail that constantly flicks up and down as they move.

Amber-lit buses swing round the corner onto Queen’s Road, emptying their cargo of commuters, shoppers, buggies, and bags. Onto the street people flock, some momentarily distracted by the increasing commotion above them in the little tree. A group of girls pause and look up as they pass.

“Wow, how beautiful!” Someone exclaims. There’s talk of what the birds could be and what they’re doing. “Long tailed tits?” a woman asks.

Pied wagtails live their summer lives beside water, usually building nests among stones although they also nest in towns. In winter they often come into cities to roost in flocks of more than a hundred birds, sometimes many more. The birds in the olive tree may be from further north, having migrated south to where it’s milder. Roosting in numbers provides warmth and a degree of safety. As birds depart in the morning, they follow each other to find food. They usually feed on insects but they will seek out any edible morsel they can find in the concrete crevices of towns.

A small crowd gathers, clogging the flow of pedestrians intent on getting somewhere fast. Out come mobile phones. A Big Issue magazine seller, clad in a sheepskin trapper hat, meanders sinuously through the throng waving his magazine like a fan. The tree twitches and rustles, the white bellies of the birds are visible among the leaves.

Pied wagtails have many names, including Gypsy Bird, Penny Wagtail and Polly Dishwasher. Their association with “washer” may have arisen because they frequent rivers and water pumps where women once washed clothes, their white and black plumage suggestive of white aprons. Wagtails feature in the myths of many cultures. In Ancient Greece, they were a symbol of love and a gift from the Goddess Aphrodite. Some say they are harbingers of rain, beckoning it with their constantly wagging tails.

When the crowd disperses, I sit beneath the small tree and reflect for a while. The birds seem oblivious of me. I believe I could reach up and touch one and my boldness would not disturb the gathering. The center of the city can be an uncomfortable, harsh place for anybody, bird or mammal; a few rough sleepers have taken up residence on the steps of a nearby shop, huddled in their sleeping bags. As I gaze up into the branches and watch the birds jostling and chirping, I smile; this little tree has provided a safe haven in the midst of a hectic, noisy thoroughfare. And the birds don’t go uncared for either; someone from a nearby shop has hung a couple of birdseed fat balls in the tree.

In the city, surrounded by tarmac, concrete, glass, and steel, it is easy to feel cut off from nature. When I find wildlife thriving safely, in the most unlikely of places, I feel surprised and happy; all such encounters are wondrous. Recognizing and tuning into this life that dances and sings all around us is rewarding in itself and a joy to appreciate with strangers I meet on the street. 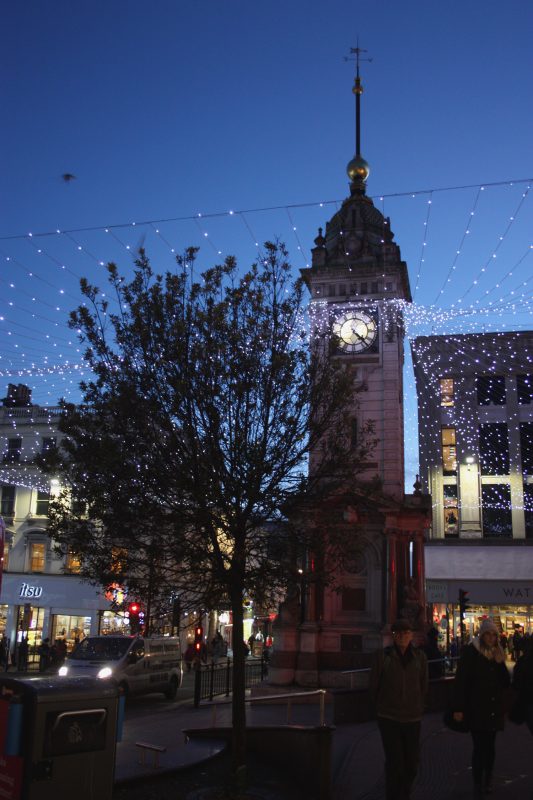 The half-baked moon looks down on the clock tower, a favorite perch for a tawdry selection of feral pigeons and herring gulls in the city. The enameled portrait of Queen Victoria on its north façade looks forever east from her arched recess. A few drops of icy rain fall, causing the marble steps to glisten; the air is chilled. A woman in a canvas jacket and rucksack stands against a shop front. She tries to take a photo of the tree and the birds as they chase about it. Darkness falls and the birds settle in, quieting. They all face in the same direction, southwest, like a collection of clay pipes in a curiosity cabinet. I follow their gaze. Between the buildings where the sky is a lighter blue, the sun has set over a dark winter sea.