This year I’ve ventured into the Pyrenees to where the clouds trawl the ground. I worked my body, hiking, freed my mind and created space for myself out of all that mountainous space. I’ve craved simplicity. Driving back up through the Dordogne, we visited prehistoric caves — Gargas, ‘the cave of hands’ and Cap Blanc, a frieze of reindeer, horses and bison carved into a cliff of limestone. It’s a while since I’ve thought about caves and cave art, but making the visits rekindled my interest. Cap Blanc was so well set up I felt as though I was witnessing a performance from the past. At Gargas, I tried to take photos, but was caught; I pretended I hadn’t understood.

The caves were moving, so long ago….

I’ve been interested in cave and rock painting for as long as I can remember, it’s one of the things that has influenced my painting. I like mysteries. I started sketching outlines, figures with no faces. My ‘buddess’ paintings evolved. They’re not ‘good’ art, but somehow they represent something very primal and important to me. I like to think of them as ‘embryos’, art in an unfinished form like the messages of cave paintings locked in stone forever. 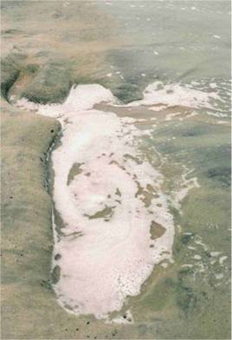 One reason I like cave art is that it’s part of nature. Ana Mendieta must have felt a compulsion to create in nature (see her ‘Silueta series’ and the photo below.) Her work inspires me, body prints and outlines of figures in mud, sand etc. Footprints, traces, clues, the essence of something or someone left behind, a fleeting glimpse that cannot be grasped fully. And so the mystery lingers.

(I have a similar feeling when tracking animals — paw prints, broken branches, hairs caught on barbed wire, rucked up fresh soil, a scuffling of feathers. What does it say? Someone, something was here.)

2 thoughts on “The presence of something…”